The pioneers who thought and built the core components of the blockchain industry.

As we saw in class "1. Public Key Cryptography" the invention of the private and public key for passing encrypted messages over the internet without the need to share the same secret key or password was a major advancement in the internet in the late 1970s. 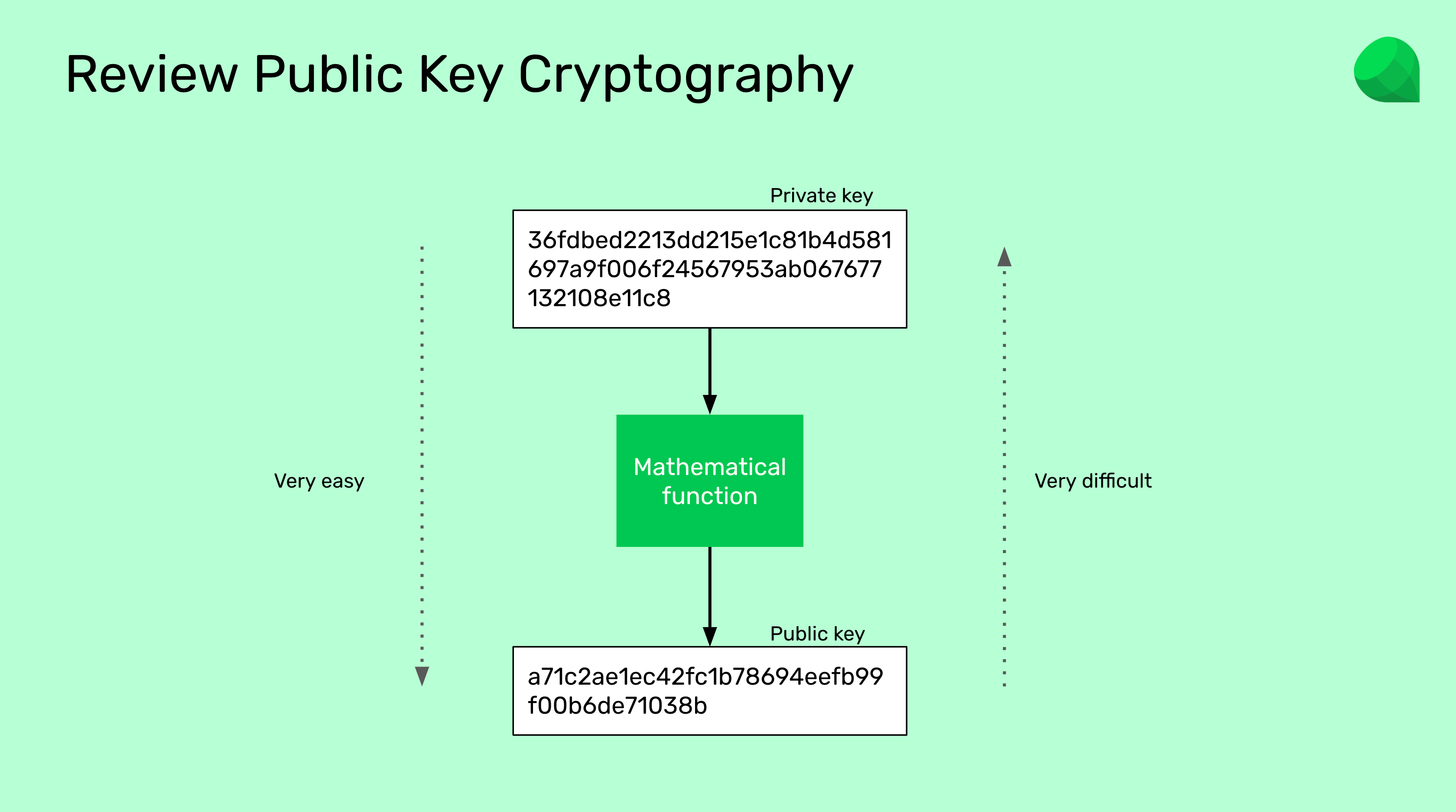 Private and public keys are actually used today as the account system on blockchains, where our public keys where we hold our crypto assets are our actual addresses and we control them with our private keys.

The Cypherpunks were a group of cryptologists, computer scientists, engineers, scientists, philosophers, and libertarians who started to interact over email groups in the late 1980s and saw the rise of computers and the internet as a great benefit for people and liberty. 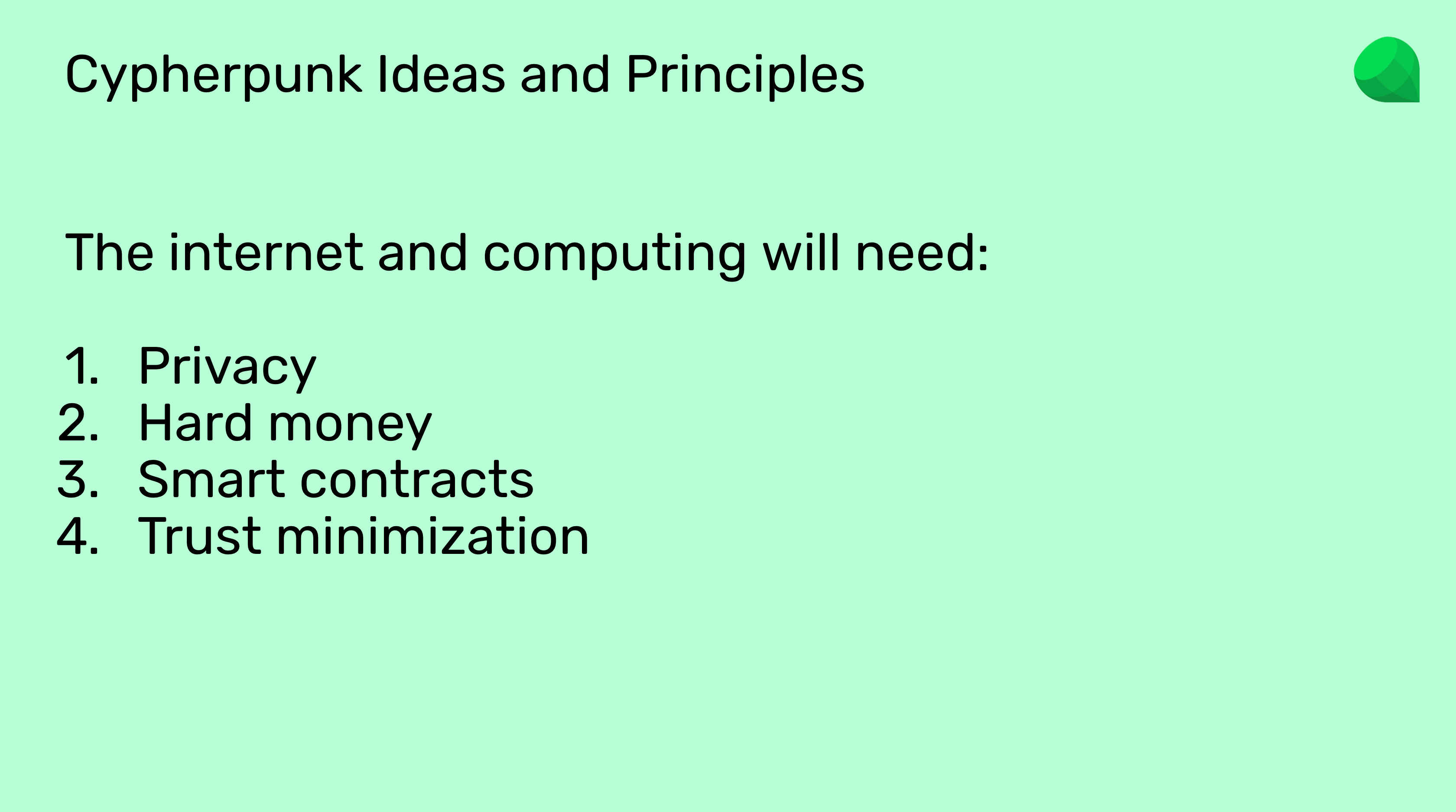 However, they also correctly foresaw the threat of the "surveillance state" with governments, corporate interests, banks, and tech companies recording everything we did and they saw that as a risk for people's interactions.

To mitigate these threats, the Cypherpunks started to ideate and build a sort of secure space, using cryptography, inside the internet so people could interact on a peer-to-peer basis, share information freely, and do commerce globally.

Based on these ideas, the goals and principles of the Cypherpunks were privacy on the internet, hard money by creating a digital currency, smart contracts to replace some key functions of centralized corporations and governments, and to enable trust minimization in general.

Emerald as a company, through our products, follows these principles and are part of our core business philosophy.

One of the founders and main drivers of the Cypherpunk movement was Tim May who wrote the major parts of the movement's philosophy and was a sort of alpha leader, very loved and respected by everyone. 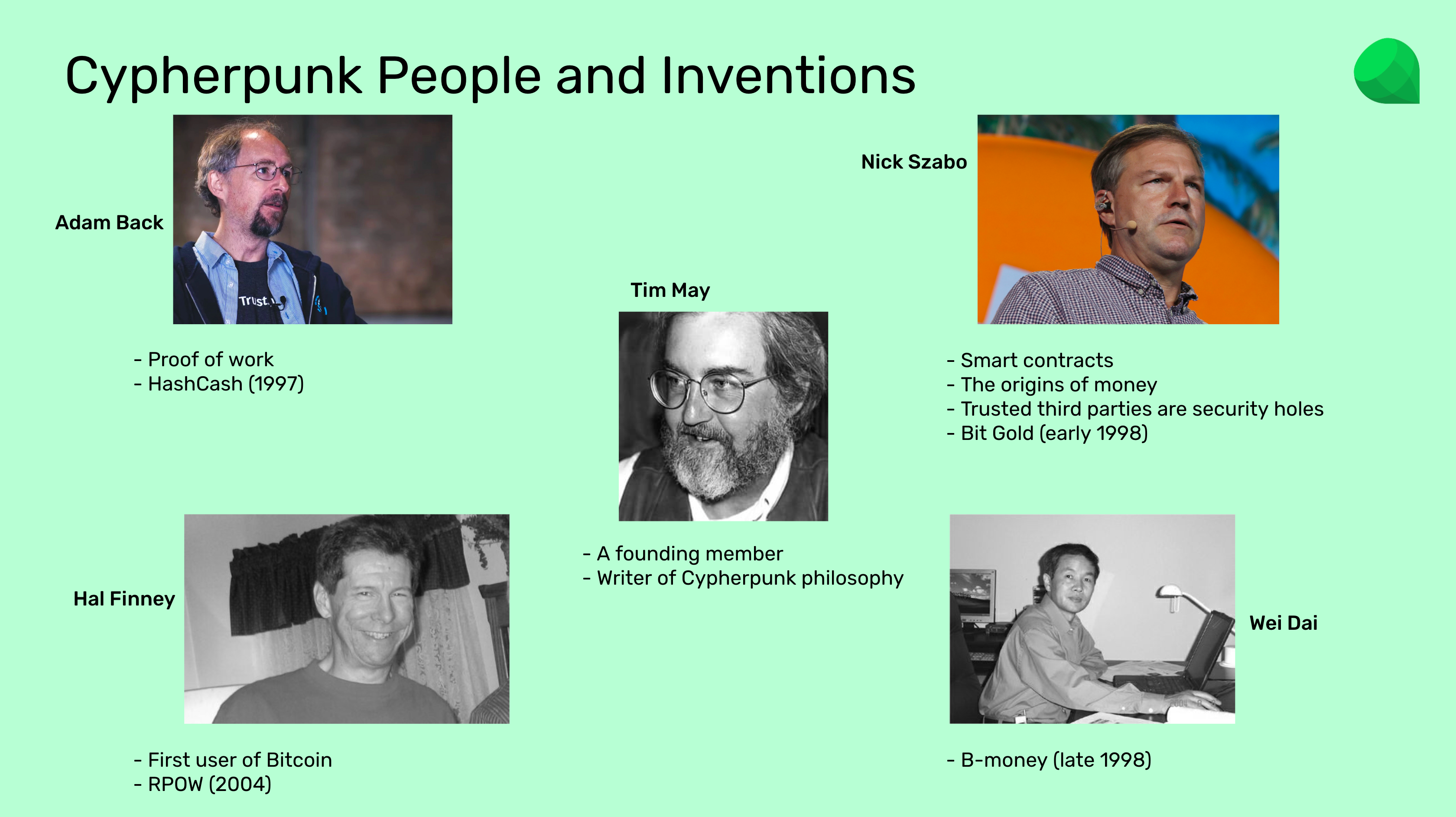 Adam Back, a prominent figure in the blockchain industry today, designed a technology called HashCash that introduced proof of work as a way to prevent spam when communicating over the internet. This technology became a core component of Bitcoin and many other blockchains.

Nick Szabo is a blockchain pioneer who had the idea and specified smart contracts in the early 1990s. He also wrote seminal essays describing money, which lent the basic principles for creating Bitcoin, and explaining why trusted third parties are security holes, a basic tenet of the blockchain industry. Szabo invented Bit Gold in early 1998, using HashCash as an analogy to gold in the real world, thus originating the concept of digital gold.

Wei Dai had the idea of creating a peer-to-peer network called B-money, where each participant would have a private key and an address in the system, and a subset of the participants would create Bit Gold through proof of work and send it to the rest of the network who would credit these workers (called miners today) an amount in a digital currency. This is the basic design and workflow in Bitcoin and proof of work blockchains today.

Hal Finney is a Bitcoin legend as he was the first user of the first cryptocurrency after Satoshi Nakamoto. He contributed greatly to the first bug fixes and upgrades to Bitcoin and wrote a lot about how it would become hard money on the internet globally. Finney built a technology called RPOW in 2004 as an attempt to transfer Bit Gold over the internet by email with a series of servers in the network that would provide account and proof of work verification services. This model of verification is another core component of Bitcoin and proof of work blockchains.

In our next class we will explain how HashCash, Bit Gold, B-money, and RPOW worked, why they failed initially, and how they became core components of Bitcoin and the blockchain industry at large.

5. Thank you for following this class!

What Is the Difference Between Custodial and Non-custodial Wallets?