In the following sections we will explain what is Ethereum Classic, that its creator is Vitalik Buterin, that it is the original smart contracts blockchain, its maximum monetary supply, and what is its "Code Is Law" security philosophy. 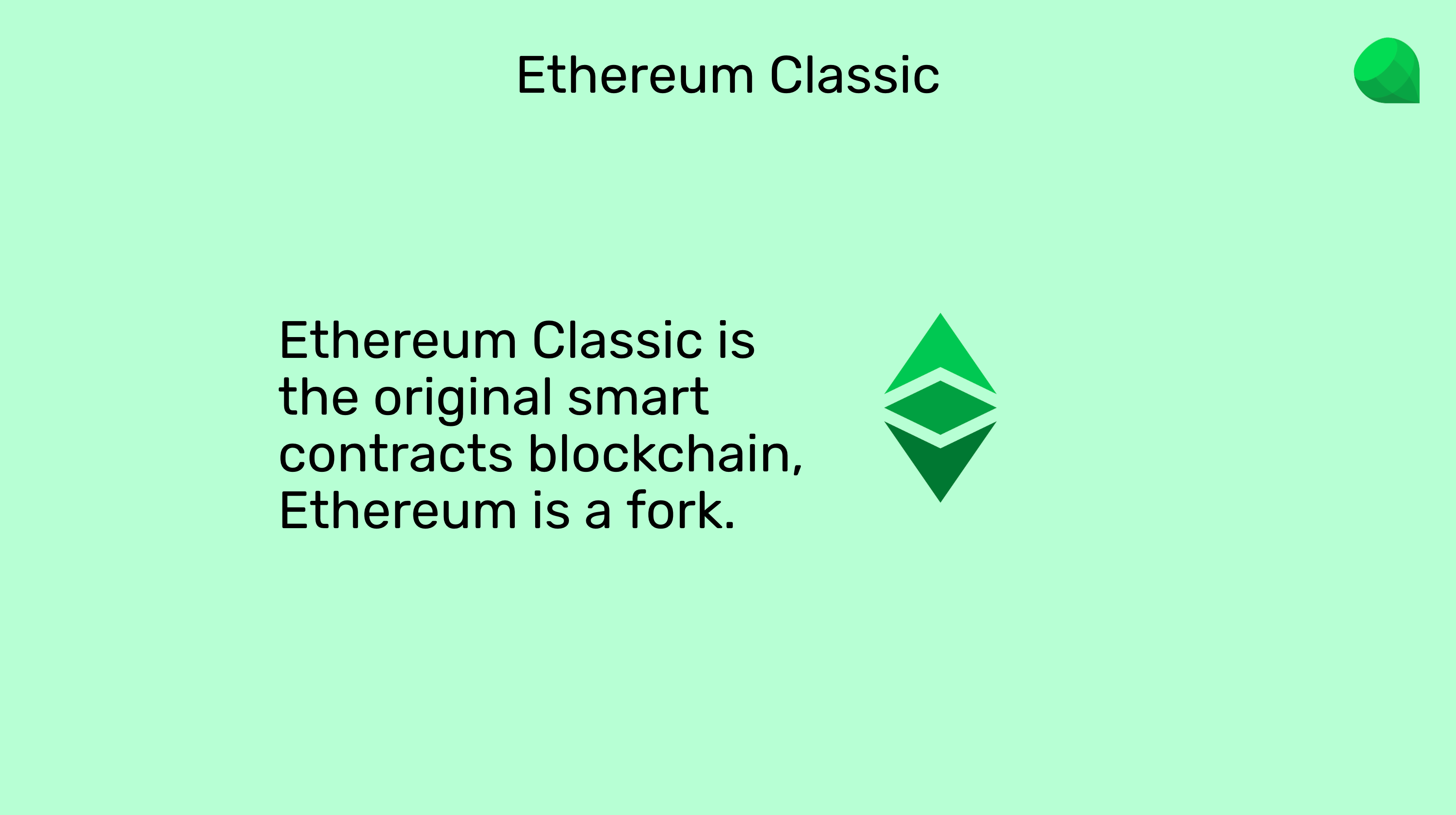 This means that Ethereum Classic holds all the history of the blockchain; with its accounts, balances, and smart contracts; according to the original protocol, plus its upgrades, with no artificial or manual changes to money, property, agreements, or decentralized applications.

Ethereum was launched on July 30 of 2015. Both Ethereum and Ethereum Classic were one network until Ethereum split away on July 20 of 2016. 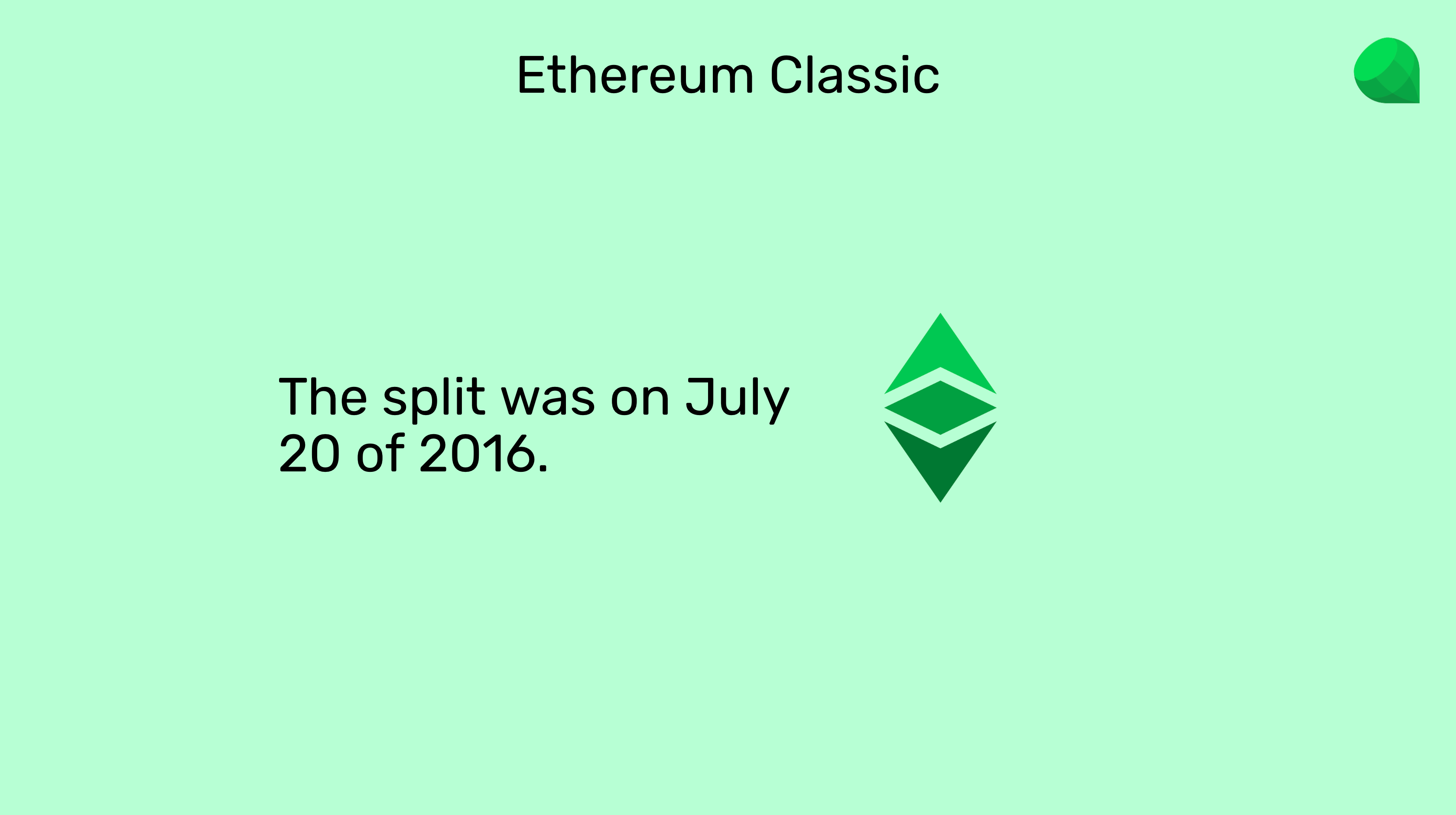 3. The cause for the split was The DAO hack.

The cause was The DAO hack and subsequent reversal of funds. 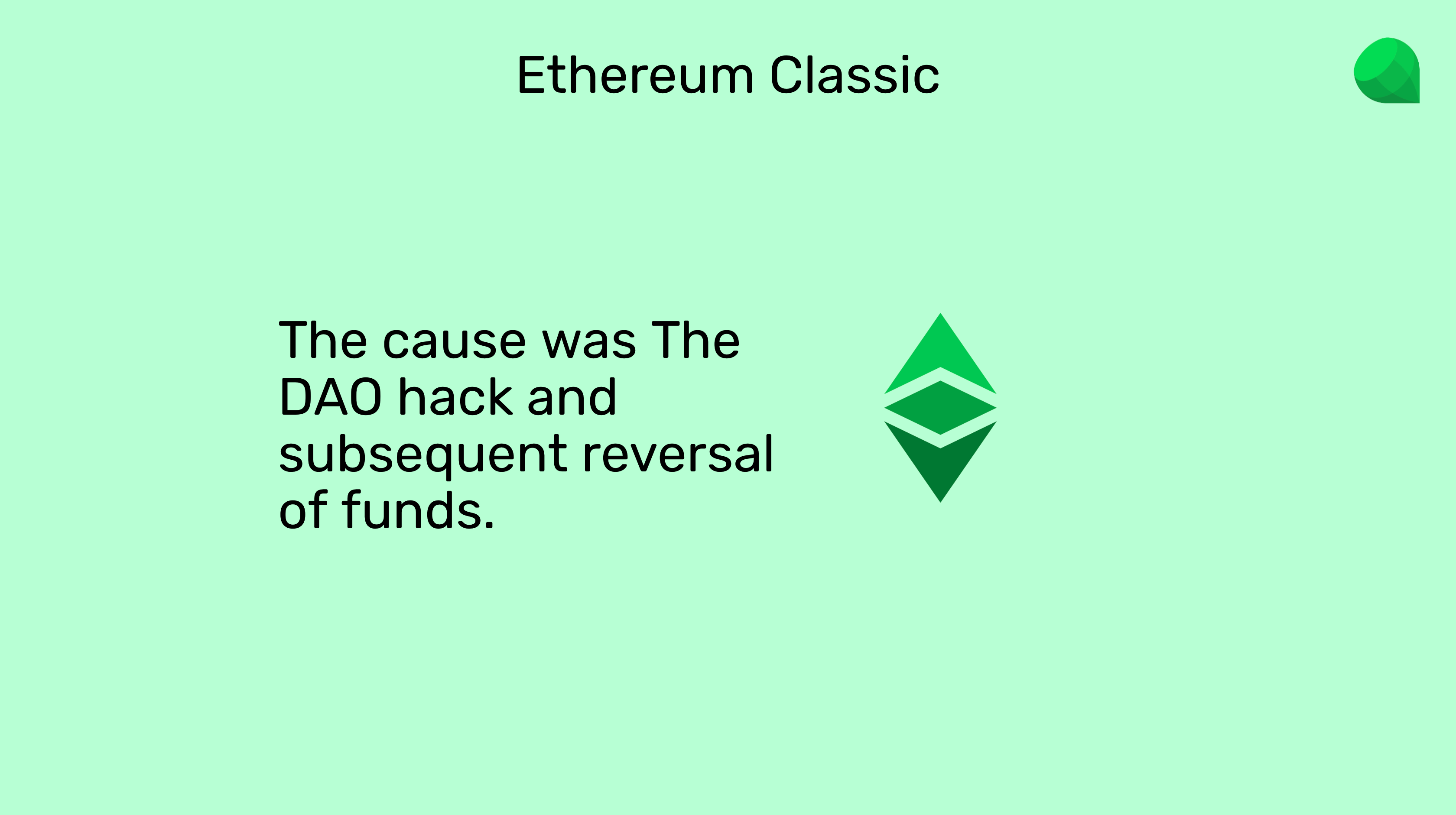 The DAO was a decentralized application that worked as a mutual fund in Ethereum that had approximately $150,000,000 in investments when a hacker stole $50,000,000 from it taking advantage of bug in the code.

4. The community decided to confiscate the money from the hacker.

By reversal of funds, it is meant that the developers and the Ethereum ecosystem at large, including miners and node operators around the world, decided to actually confiscate and delete the balance of the hacker and return the funds to the original investors. 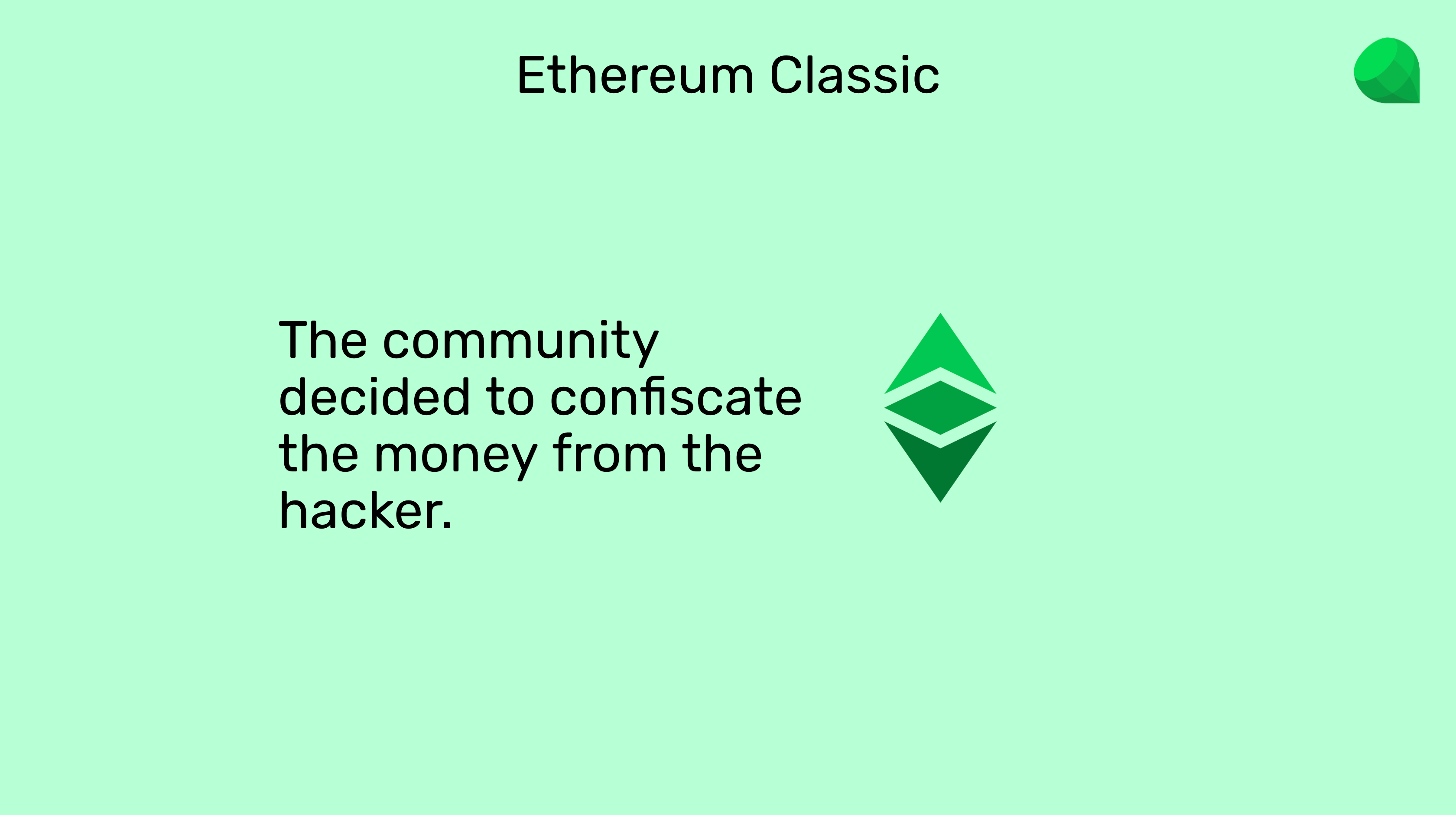 To coordinate the intervention by the community to remove the funds and return them to investors, the developers of Ethereum set block 1,920,000, which was produced on July 20 of 2016, as the block where the reversal was to happen. 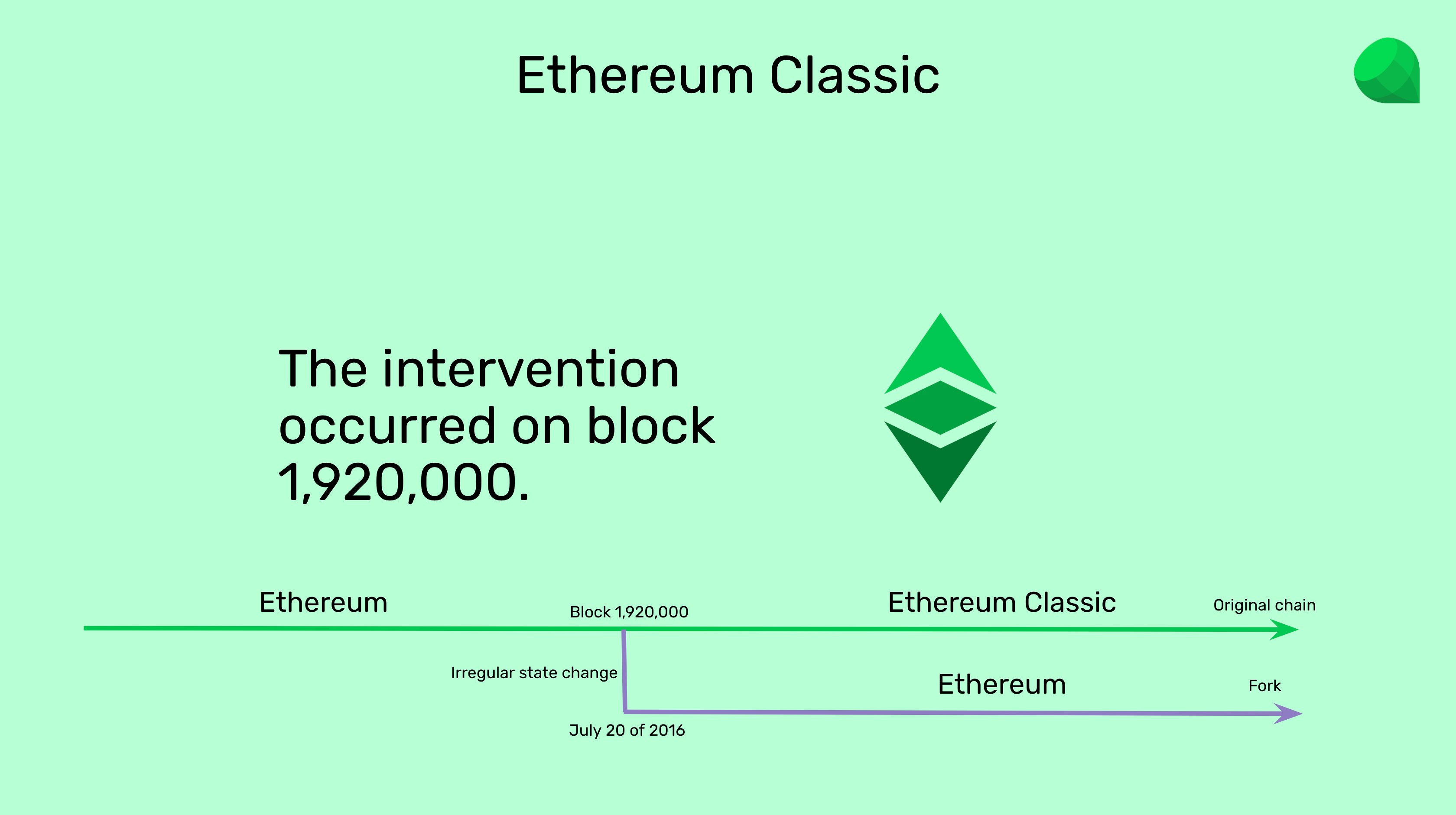 As the diagram above shows, Ethereum Classic is the original untampered blockchain and the hacker funds remained in it while on Ethereum they were reversed.

6. The majority went with Ethereum. 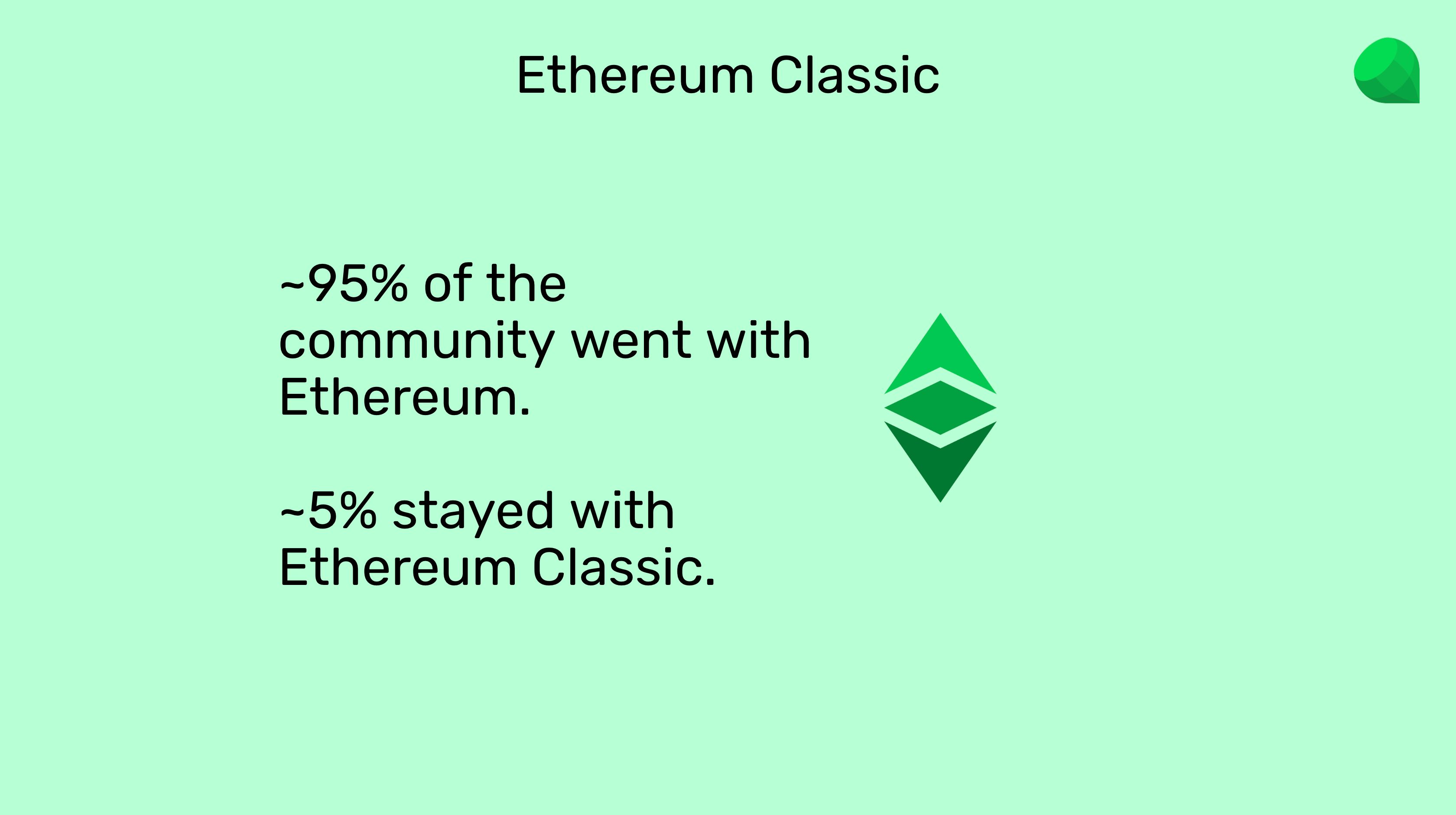 7. Ethereum Classic follows a philosophy of "Code Is Law".

Ethereum broke the immutability and decentralization ethos of the blockchain industry as they manually intervened in the account of the hacker and deleted their funds. 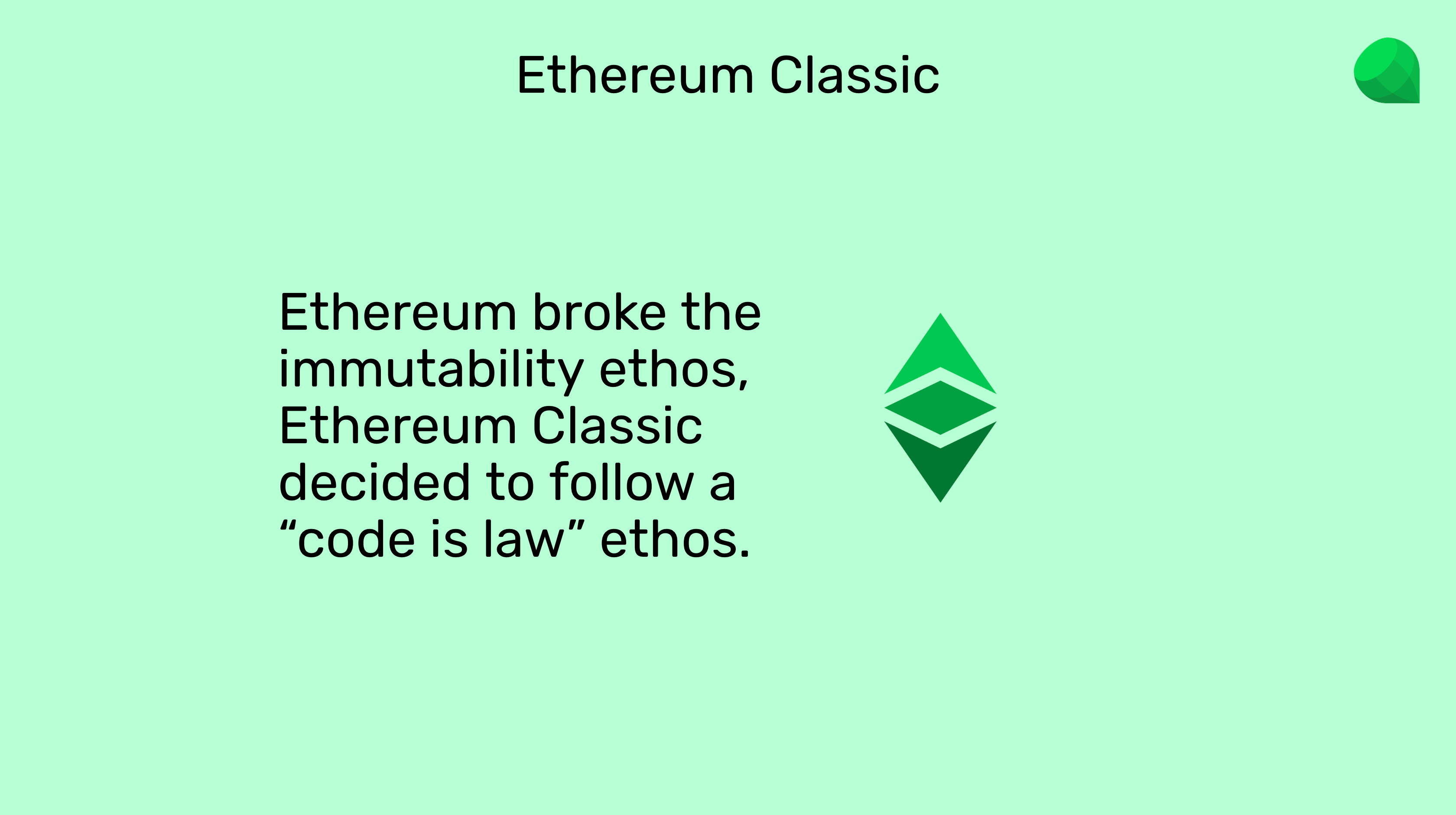 Ethereum Classic decided to follow a “Code Is Law” ethos, which means that any disputes between parties must be resolved through the legal and law enforcement channels, but not by tampering with the sanctity of the accounts, balances, and smart contracts inside the blockchain.

8. Ethereum will move to Proof of Stake and Ethereum Classic will not.

Additionally, Ethereum will move to Proof of Stake and has no fixed monetary policy. 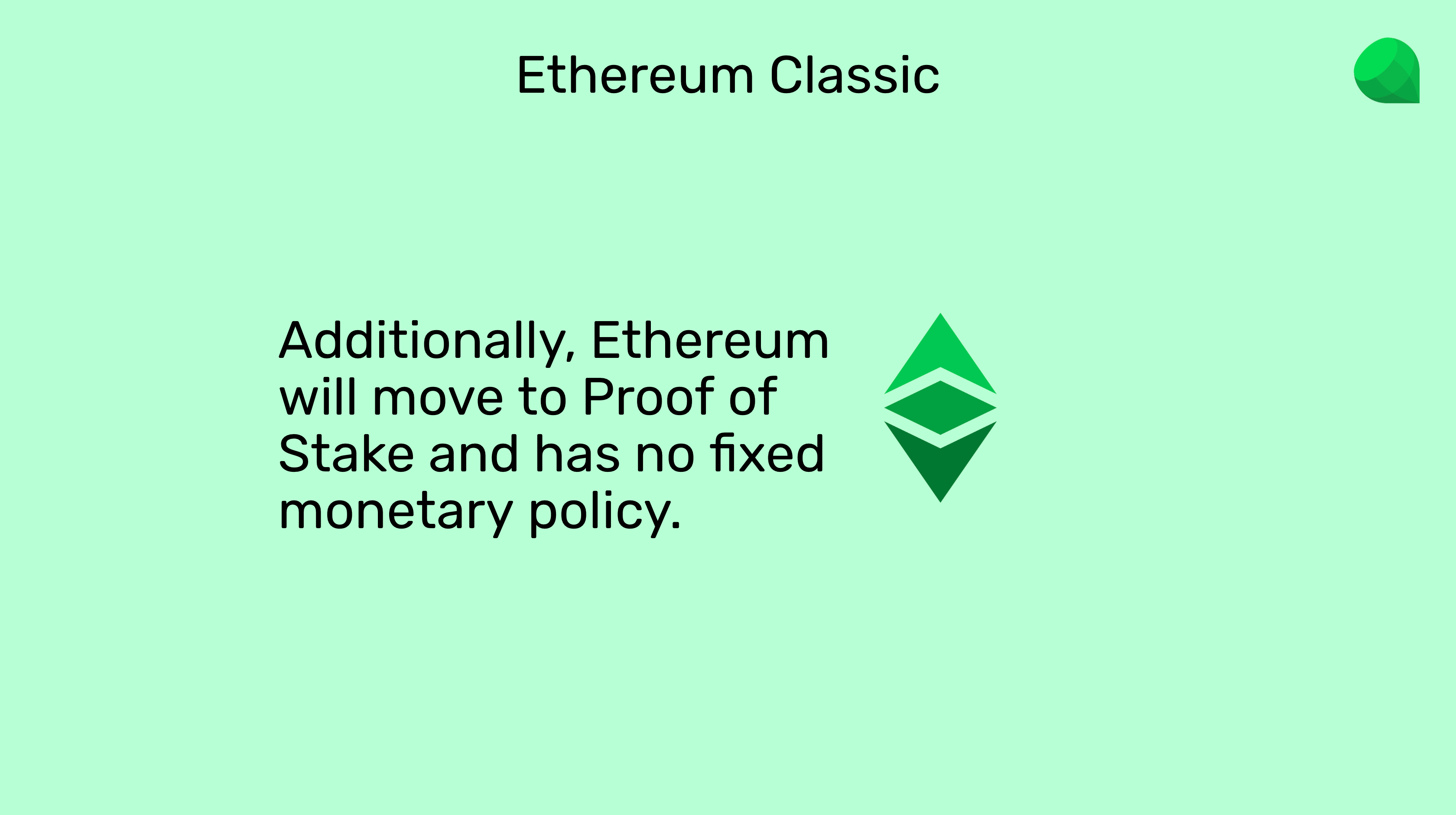 9. Ethereum does not have a fixed monetary policy and Ethereum Classic does.

Ethereum Classic will stay with Proof of Work and a fixed monetary policy. 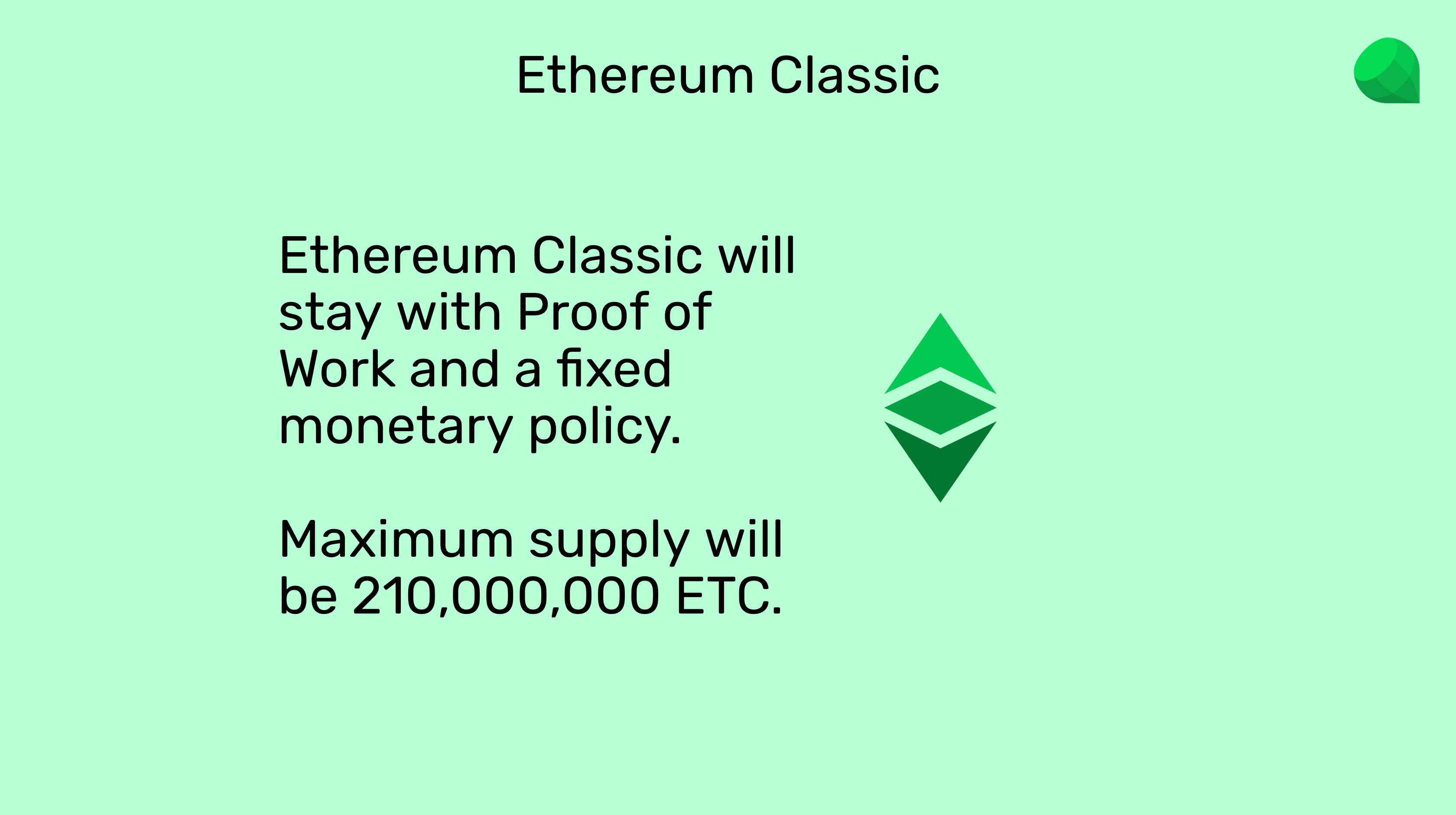 Ethereum does not have a maximum supply number and they change the rules as they see fit.

10. Ethereum Classic is Bitcoin, but with smart contracts.

In summary, Ethereum Classic is the technology of Ethereum with the philosophy of Bitcoin. 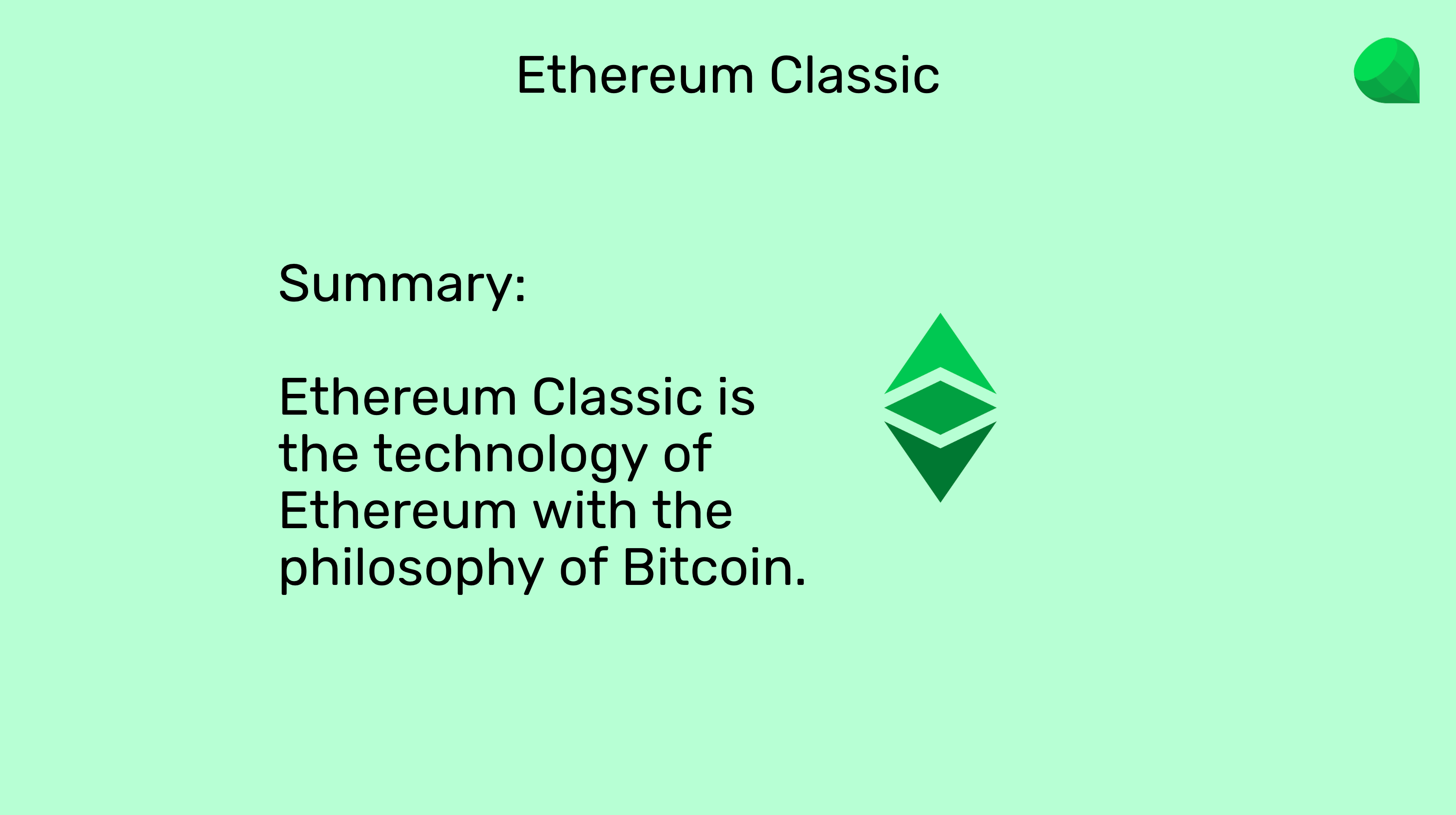 What Is the Difference Between Hardware Wallets and Software Wallets?