The Units and Denominations of Ethereum and Ethereum Classic

How we count and divide $ETH and $ETC.

Educational post: What are the denominations of ETH and ETC?

When we use traditional currencies such as the dollar we are used to calling them "dollars and cents".

We are also accustomed to different names for different quantities of such currencies. These may be, in the case of the dollar, "one cent" for one hundredth of a dollar, "a nickel" for five cents, "a dime" for ten cents, and "a quarter" for twenty five cents.

The Units of Ethereum and Ethereum Classic

The same applies for cryptocurrencies as Ethereum and Ethereum Classic.

Both networks are technologically the same in practice, so they both have identical units and denominations.

In both networks, their native currencies are called "ether", but their symbols in the market and the economy are $ETH for Ethereum and $ETC for Ethereum Classic.

The Denominations of Ethereum and Ethereum Classic

For machine purposes, developers and engineers have to use these atomic or minimal indivisible units of $ETH and $ETC to express their quantities.

Below is a list of the denominations of $ETH and $ETC as used by programmers for machine and machine to machine computations:

As seen above, the minimal atomic denomination of $ETH and $ETC is 1 Wei, which is one quintillionth of an $ETH or $ETC. The name "Wei" was given to it in honor of Wei Dai, who is the cypherpunk who had the idea of the first cryptocurrency network design in late 1998.

When you multiply 1 Wie by one thousand you have a Kilowei, then a Megawei (one million), Gigawei (one billion), a Szabo (one trillion), a Finney (one quadrillion), and finally an ether (one quintillion Wei).

The Szabo denomination was named in honor of Nick Szabo, the father of smart contracts, and the Finney in honor of Hal Finney, the first user of Bitcoin after Satoshi Nakamoto launched it in January of 2009.

Note: The Gigawei is the denomination that is used to pay for gas in Ethereum and Ethereum Classic (see the last section below for an example in Emerald Wallet).

For use by humans, and how they are expressed in the great majority of applications and decentralized applications, the above denominations are inverted to make it easier to process mentally.

It must be noted that the above expressions are quantitatively identical as in the previous section, it is just a different way of writing them.

As seen in the image below, when using Emerald you may use decimal expressions to send and receive $ETH or $ETC and when paying for gas, we usually express the gas prices in Gigawei, which is the industry standard 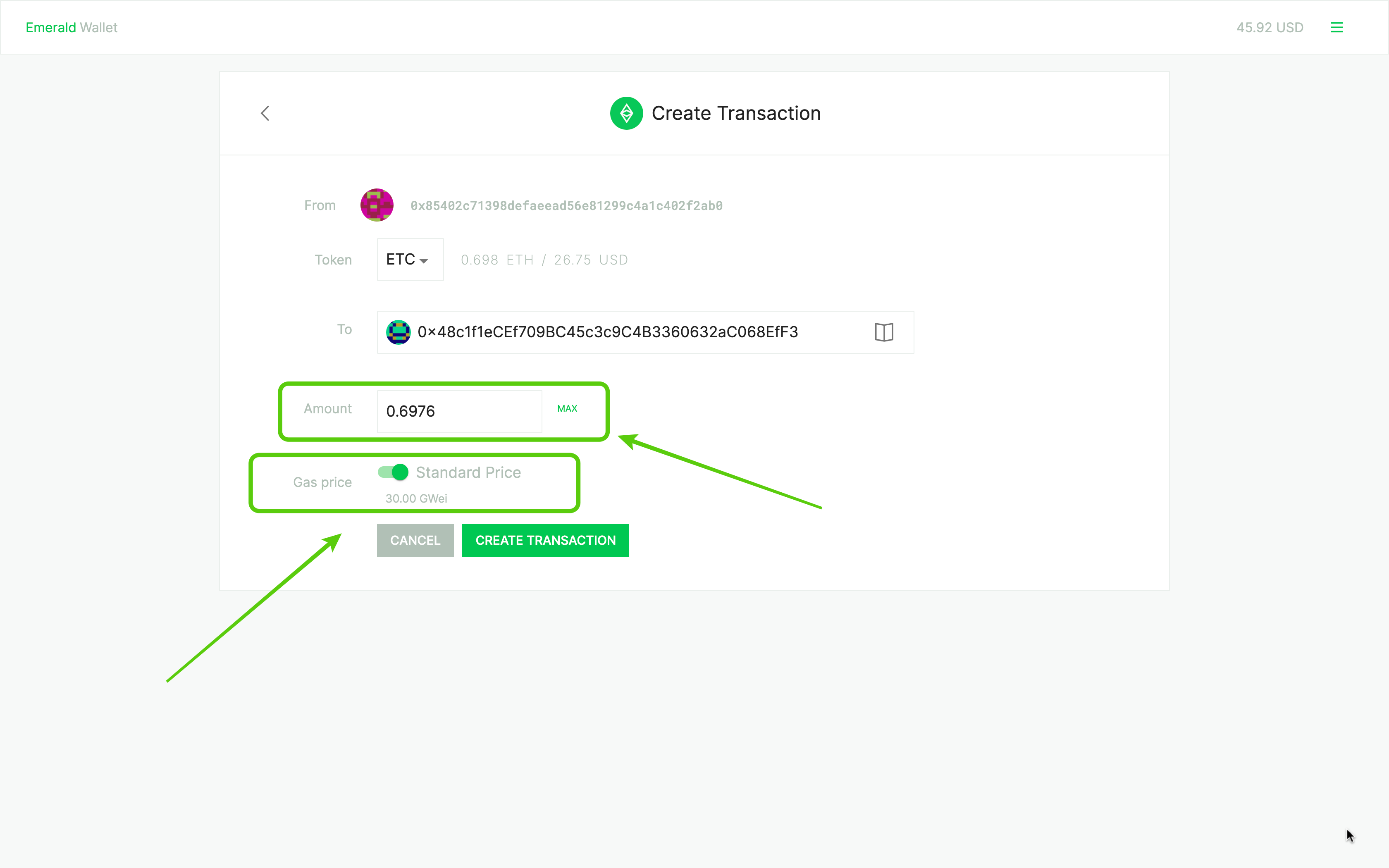 Emerald Blockchain Course: 13. What Are Public and Private Keys?