The migration from Proof of Work to Proof of Stake explained

What changes will be implemented and what you should do.

The Ethereum Merge is one of the most important events in the history of the Ethereum network and the blockchain industry in general.

What Is the Merge?

Basically, what will happen is that Ethereum will migrate from a Proof of Work (PoW) consensus mechanism to a Proof of Stake (PoS) system. This means that they will stop using miners to build blocks by spending enormous amounts of capital and electricity and will start using stakers who will deposit money in special accounts to gain the privilege of producing blocks for the network.

What Is the Goal of the Merge?

The goal of the merge is that Ethereum will spend 99.95% less electricity running the network and that it sets the stage for future changes that will significantly increase the scalability of the network.

This means it will focus on processing more transactions per second.

What Will Happen During the Merge?

Since its inception in 2015, Ethereum had plans to migrate from PoW to PoS. The Ethereum Foundation and many researchers and developers took around six years to design and build the new system and launched a parallel PoS network, called the Beacon chain, in late 2020.

After more than a year of testing and practice runs to do the merge between the Ethereum network and the Beacon chain, both networks will be one when the merge happens, hence the term "merge".

When the merge happens, PoW miners will stop producing blocks for the network and PoS validators will take over producing blocks and receiving the block rewards as compensation for their role.

When Will It Happen?

As the merge is determined by how the PoW difficulty will evolve in the next few days, it will not happen at a set date or block number, but in a range of dates which is currently estimated between September 13th and 16th of 2022.

What Do I Have To Do?

If you are a regular user of Ethereum, own the native token ETH, ERC20 tokens, stablecoins, and use Dapps, then you do not need to do anything.

The merge will occur and everything will continue working as usual.

Only those who are Dapp developers have to adapt their systems, and stakers and miners will switch roles and they need to make some preparations, but the rest of the ecosystem will continue as usual.

Your addresses and Dapps will continue working normally!

What Will Happen After the Merge?

As seen in the image below, and we have described in previous posts, Ethereum had a split in 2016, which created two networks out of one: Ethereum Classic (the original chain) and Ethereum (the chain where the funds of TheDAO hacker where confiscated and returned to the original owners). 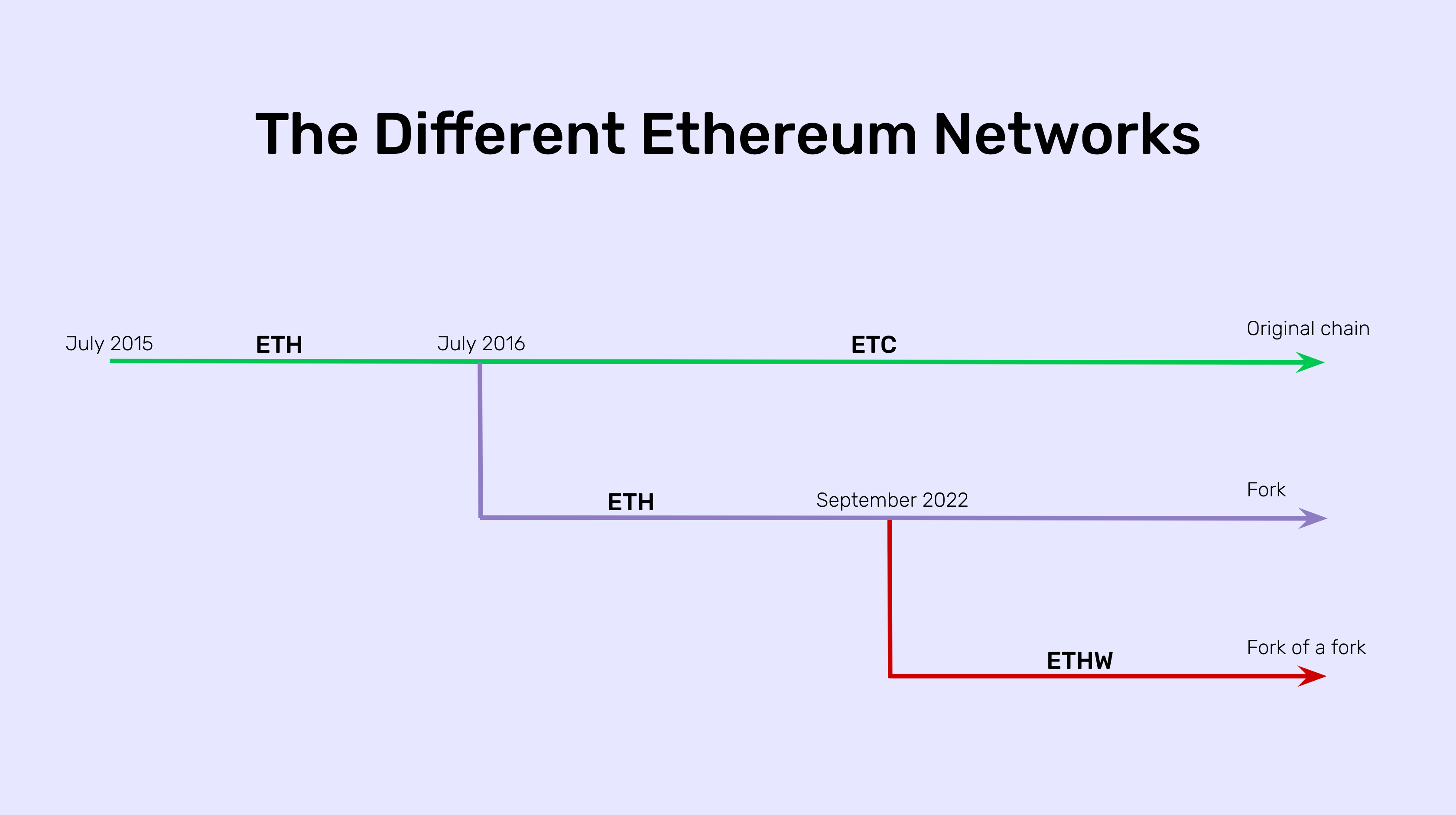 There is talk that some PoW miners will try to perpetuate a version of Ethereum which will stay with the PoW consensus mechanism. In this case, it is possible that a new split will exist with the name "Ethereum PoW" and symbol "ETHW".

If this happens we will keep you updated.

However, the great majority of mining pools, Dapp developers, and stablecoins have announced that they will not support the ETHW split, so it is possible that it will fail.

It is something that we will monitor very closely and will keep you updated about.

How Will Ethereum Keep Changing In the Future?

As said above, the main benefits of the merge are that it sets the base for future changes in the Ethereum network. These are primarily oriented at increasing transactions per second, thus lowering fees per transaction and making Dapps cheaper to use with larger volumes.

The most important future change planned will be sharding of the blockchain, which will break up the database of accounts, balances, and smart contracts into shards, or different smaller blockchains, and enable the parallel execution of transactions, thus increasing the volume processed by the ecosystem.

We will keep you posted about all these changes!

Emerald Blockchain Course: 11. What Is Proof of Stake?